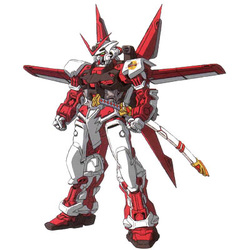 The development of the Astray project is interrupted when ZAFT attacks Heliopolis on January 25, C.E. 71. Orb desires to keep the Astray project secret and destroys the Astray factory, but a Coordinator named Rondo Ghina Sahaku is determined to save the units. To that end, he downloads the data from all the Astray units into the Red Frame, including the latest version of the Astray operating system. The latest version of the Astray OS allows a Natural to pilot the suit, similar to the OS developed later on by Kira Yamato for the mass-produced MBF-M1 M1 Astray. Following the destruction of the Astray factory, the Red Frame is discovered by Junk Guild merchant Lowe Guele. Although the Red Frame comes armed with a beam saber and beam rifle, Lowe refrains from using these weapons because they drain energy from the Red Frame's battery. Instead, he prefers to use the "Gerbera Straight" katana, which is created for him by an eccentric old man named Un No. After Lowe discovers the Red Frame, several parties make various attempts to capture the unit. In one such attempt, Orb test pilot Juri Wu Nien briefly steals the Red Frame to test if its operating system allows a Natural to pilot a mobile suit. In his travels, Lowe also encounters the Gold Frame, piloted by a female Coordinator named Rondo Mina Sahaku. In one encounter, the Red Frame is damaged and forced to enter Earth's atmosphere. Lowe repairs the destroyed right arm by replacing it with the Gold Frame's right arm. At Orb's Morgenroete facility, Lowe acquires a flight pack designed for the M1 Astray. He also utilizes an underwater salvage unit built out of the upper frame from an amphibious UMF-4A GOOhN. Later on, Lowe creates further upgrades for his suit. (from mahq.net) 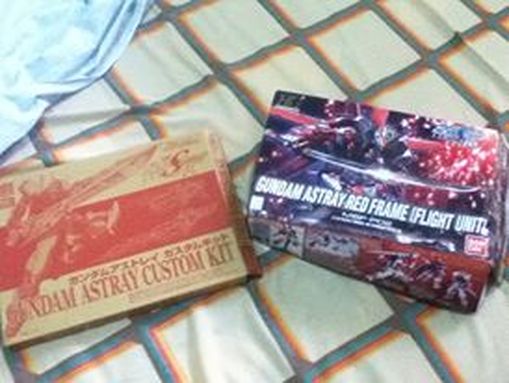 The boxes
OK - If you've read my build and mini-review of the Masurao then you've probably seen the praise I gave for Mr. Bushido type mobile suits. But if I were to go fanboy crazy over a particular MS then that would have to be the Gundam Astray Red Frame. I got the 1/100 No Grade version around seven years ago and that was my first kit that got me into the hobby. Sadly, that kit died when I accidentally toppled the box with the kit inside above a high table. To keep things' short, that Red Frame now looks like the Gold Frame Amatu did a number on it and is 'probably' beyond repair. *cue melodramatic music*

But enough about that sad story; I was so excited way back in June (?) when I received that Facebook notification from GundamGuy about the announcement of the kit. I Immediately spazzed all over the place and even more when I heard about the optional sword that was about to be released. Come September 2013, I got the Hobby Japan magazine that was with the Red Frame's Caletvwlch sword and the high grade kit itself.

There is one minor gripe that I'd like to point out - the box. I don't have anything against the box art. However, the local courier service did a number on the box and it is practically destroyed on one side. Luckily the contents were all intact when I received my package.

The manual is simple enough and comes with some pages where you can get a good look of the kit once it is finished. Majority of the runners are colored red (duh!). But what surprised me is that Bandai gave us the opportunity of having the polycaps in red as well. I did not purchase the High Grade Blue Frame Second L yet but I've already seen that Bandai also did the same thing with that kit (polycaps are molded in blue).

And to everyone's biggest disappointment - the Gerbera Straight. I mean, the kit is already awesome and I've already seen some reviews about its above average articulation; but why, oh why did Bandai mold the all famous Red Frame katana in ONE DULL GRAY PIECE! Well, I cannot say it cannot be remedied as we can always paint the thing with its rightful colors but they could at least made the blade a shiny silver instead of this crap gray. Instead, Bandai gave us foil stickers to make the blade shiny. Hooray -_-; 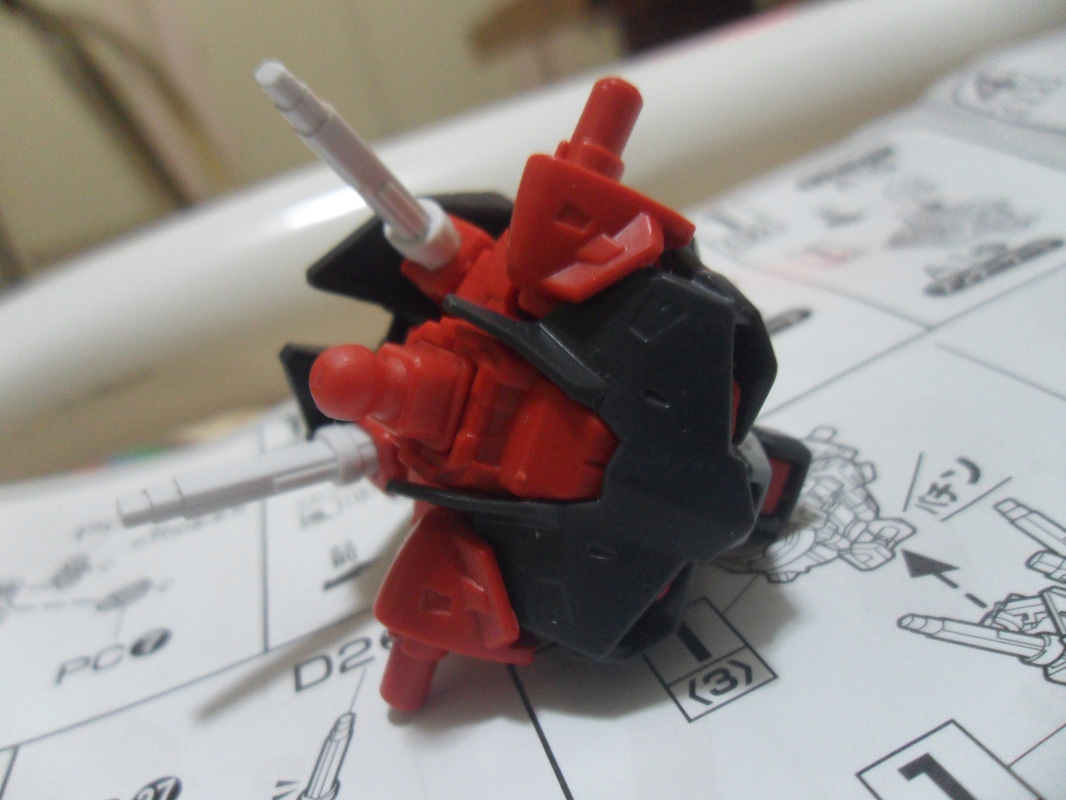 The body
As with most gunpla, the manual starts out with the body. It's a basic high grade body and the parts are pretty stable. The backpack, however, is a bit loose in a sense that it will jiggle but it will not fall off with minor movements. 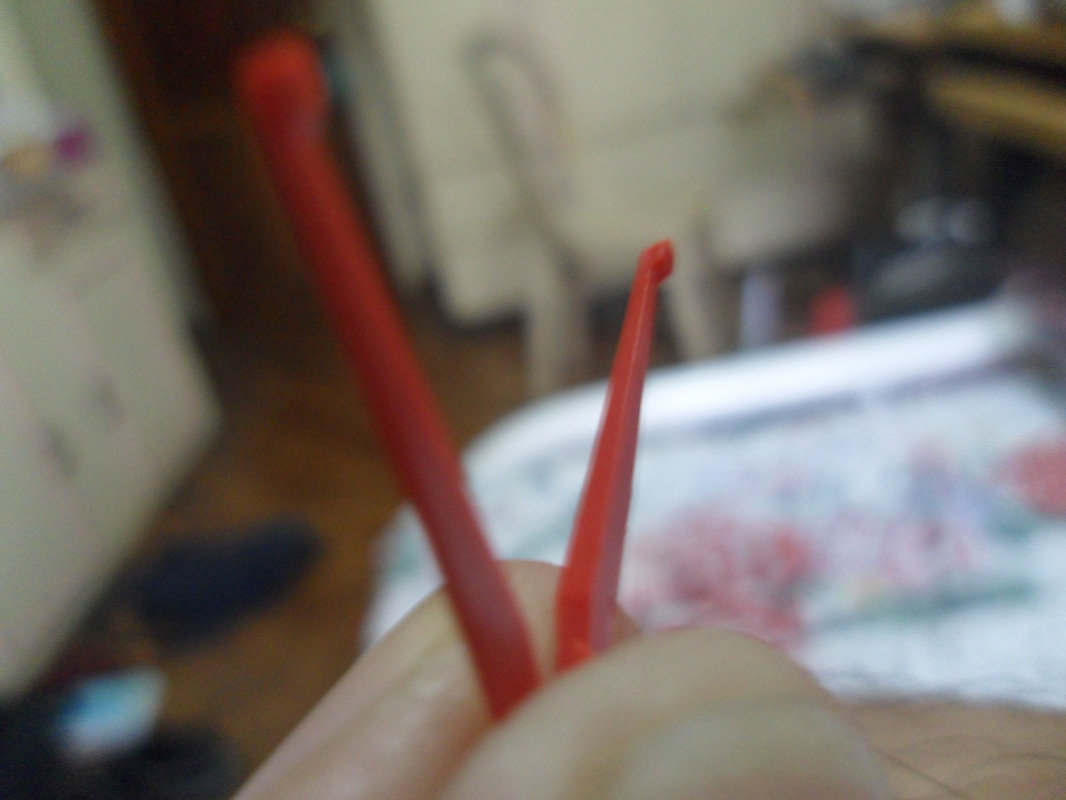 V-fin
I still don't understand to this day why Bandai places these extra plastic things on V-fins and some edges. They look ugly but can be remedied with a little sandpaper action. 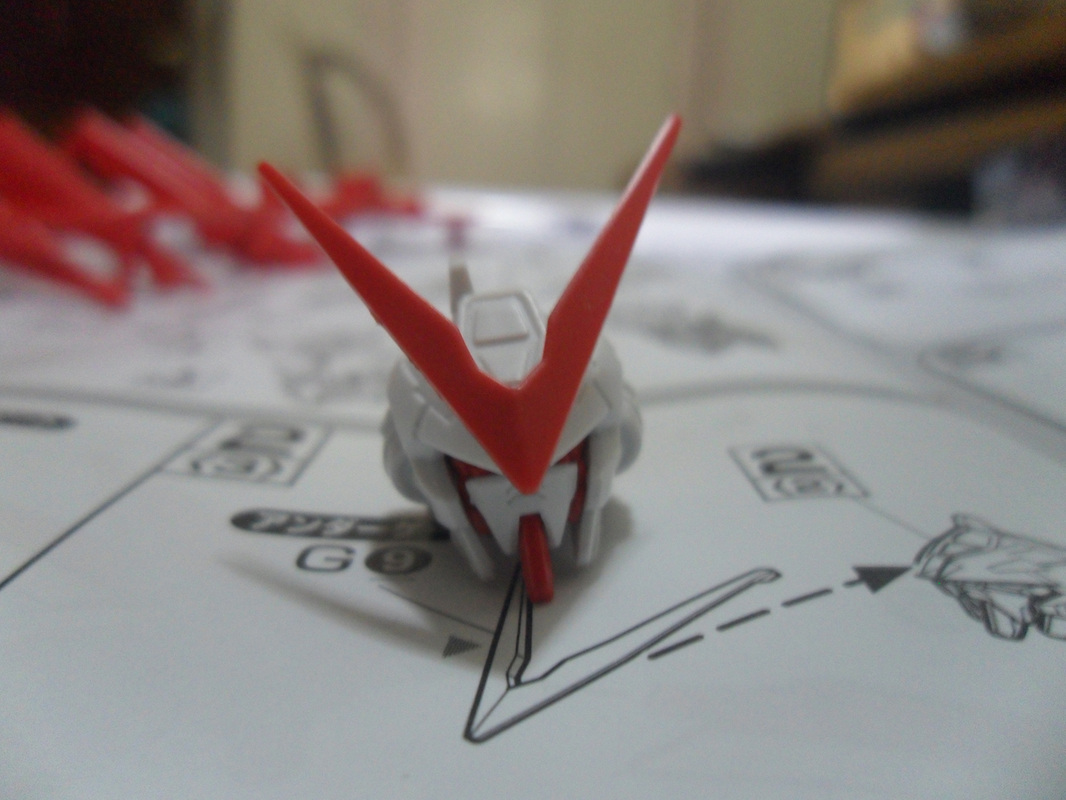 The Red Frame head
Here's the head piece after I've sanded down and sharpened the edges of the V-fin. See, it now looks fiercer than with those ugly extra plastic things jutting out. 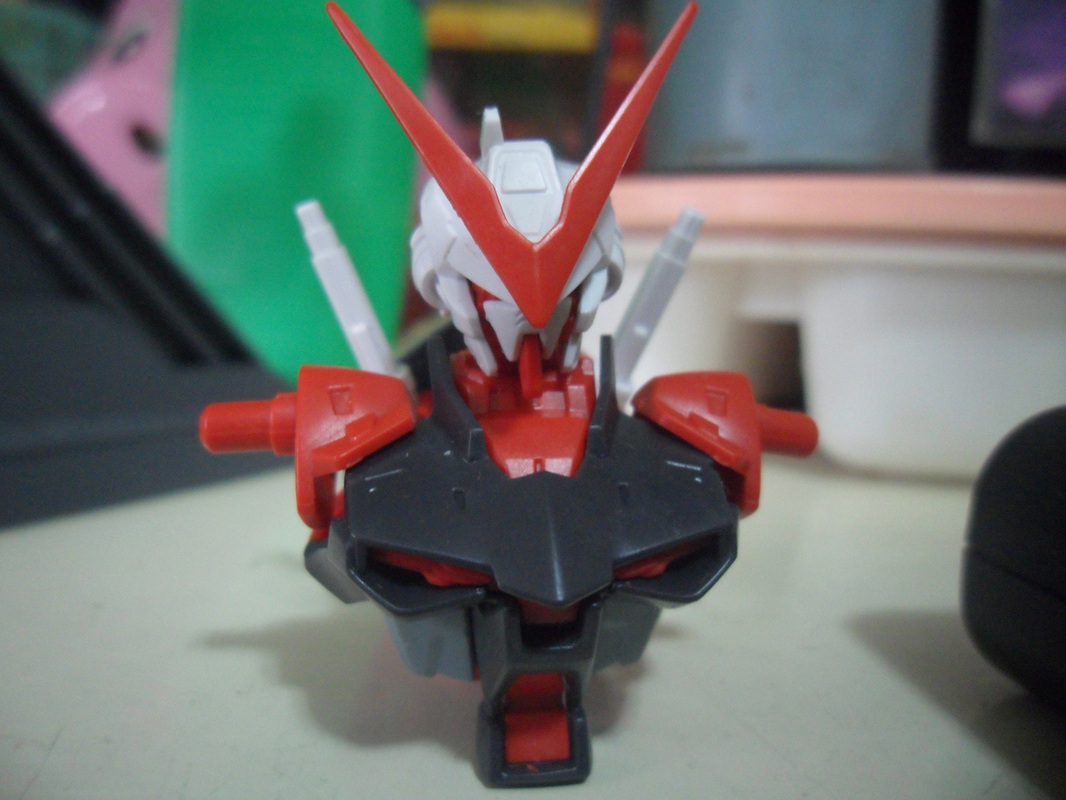 Head + Body
Here's the head connected to the body. The head's movement is above average. I did see some modelers over the Internet that make the Red Frame look down on the barrel of its beam rifle so I guess it's OK. 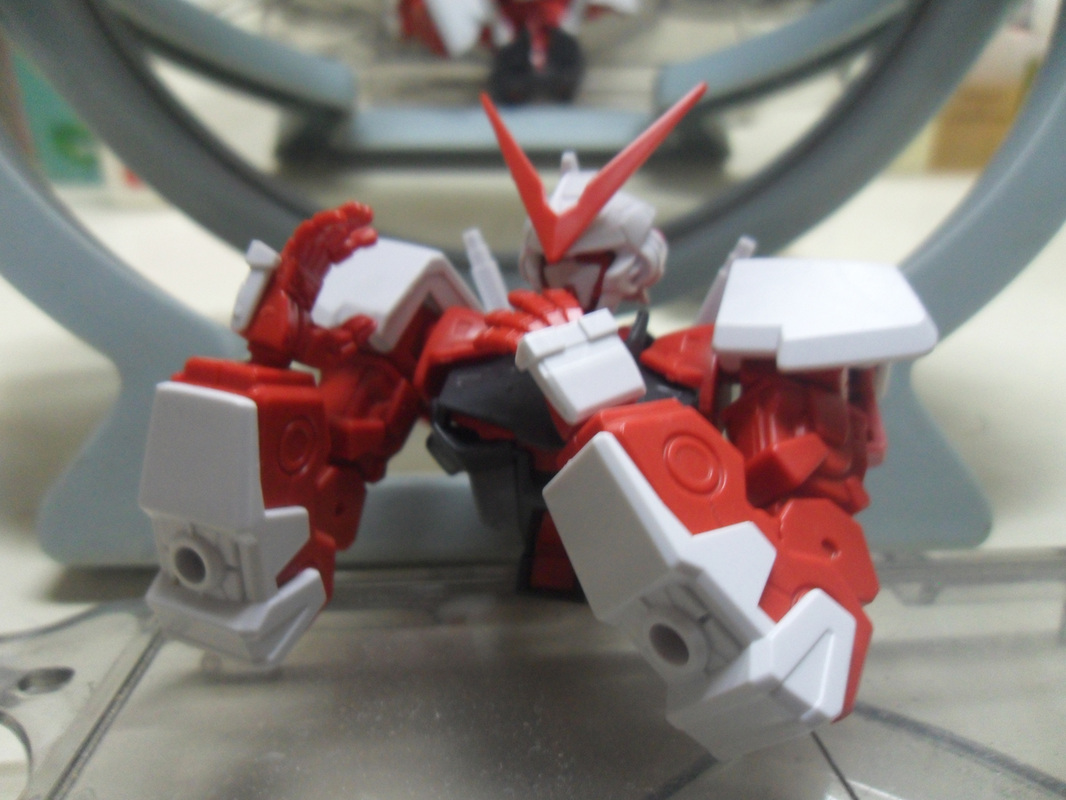 Arms
The arm articulation is a beauty! The arm is double-jointed around the elbow which makes it for more dynamic poses. I'll try to make a pose like Kenshin Himura from Rurouni Kenshin once everything is finished. ^_^

Also, Bandai has graced us with two open hands as manipulators so that's definitely a plus on my book. If you've been building high grades for some time then you'll notice that Bandai will only put one open palm manipulator. 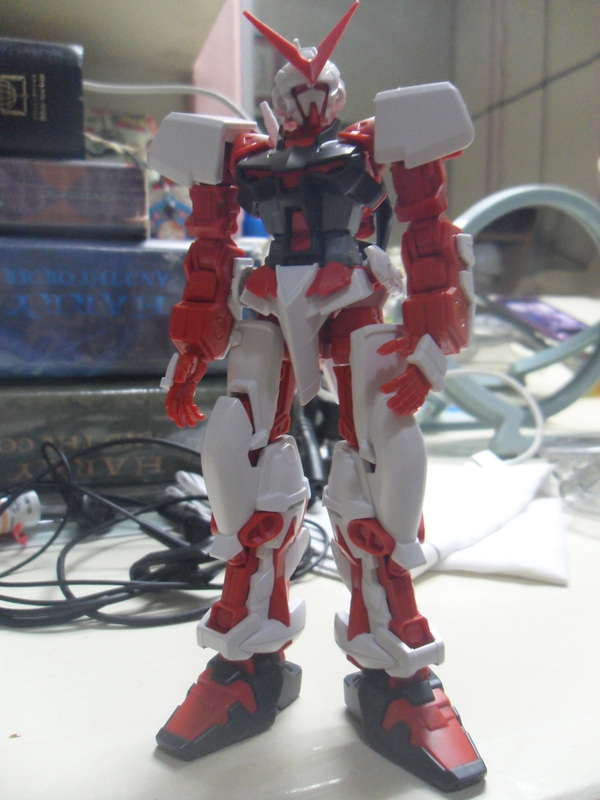 The basic Gundam Red Frame Astray
The legs have above average articulation and can let the kit kneel pretty well. 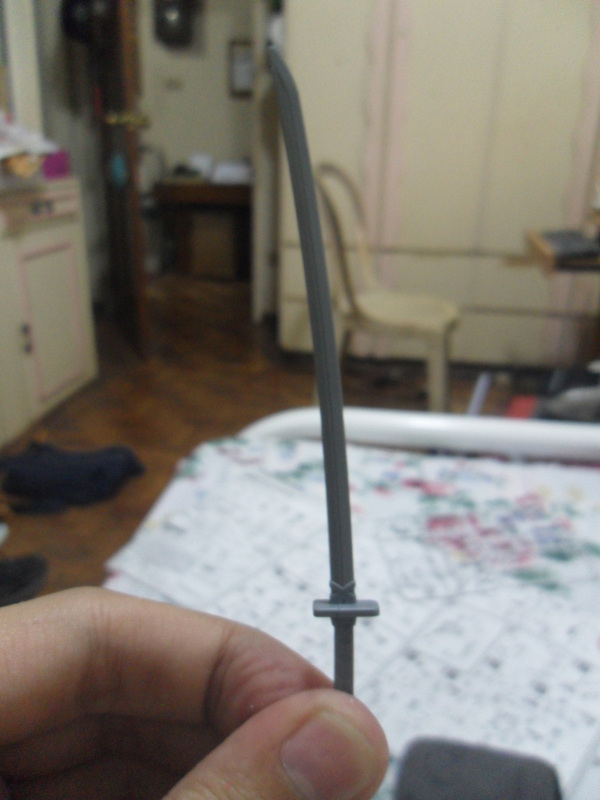 Lowe will certainly be disappointed when he sees this...
I was not able to take pictures of the the other weapons and the flight pack but all I can say that the colors are molded pretty well (excluding the Gerbera Straight). The flight unit is also stable when inserted on the back of the Red Frame and I've yet to encounter weight issues when letting it stand without a display base. Good one on that Bandai!

I'll update this post when I've done playing... err.. building the kit as a whole. I have yet to take pictures of the entire kit or the Caletvwlch. 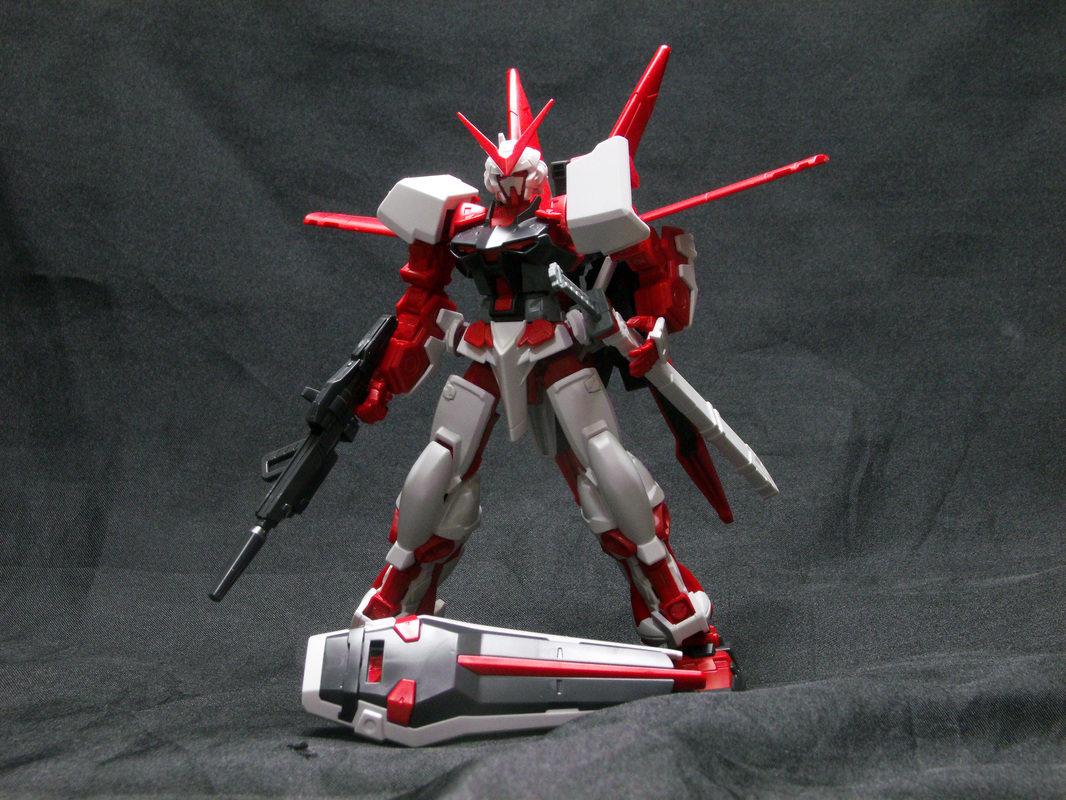 Conclusion: Even if you are not a Red Frame fanboy like me, you will definitely love this kit.

First of all, the articulation is certainly above average but it is no High Grade 00 Gundam. Yes you can do splits with the legs and the kneeling pose is good, but that 00 Gundam is certainly hard to beat in this field. There are only minimal issues I've encountered with the kit. For one, I did not like how the waist armor pieces are connected. It was very loose and moving around the sheathe for the Gerbera Straight will make the armor piece fall from time to time.

For the colors and the design, it is what to be expected for a high grade kit. The Gerbera Straight could have been molded into better, two separate pieces but Bandai skipped on that one. However, the details on the kit are amazing even for a high grade kit. If you can and if you want, you can even put in some extra details on the armor pieces alone and you can make it look like near Master Grade.

The playability of the kit is very superior! You get the sword, the well molded shield, the flight pack, the two beam sabers, the Bucue head, and the above average articulation makes you pause in deep thought as you image an immense number of poses you can do with this kit. So expect hours of playing with this High Grade SEED kit as you explore its poses along with its weapons.

Final Word: SEED fan or not, this is definitely one kit that should go on your shelf or cabinet.
Powered by